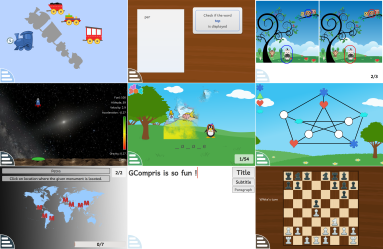 After 7 months, we are proud to announce the new version of GCompris 0.61.

One important change on the commercial side of GCompris. Bruno Coudoin is now replaced by Timothée Giet as the commercial entity. Timothée is a graphic artist with a long list of contributions on GCompris and in the KDE community. After 16 years of continuous development on GCompris, Bruno is willing to step down and gives the opportunity to a new team to bring the project forward. For now, all sales go to Timothée and he is in charge of the commercial support. There are no changes in the licensing nor in the development process which is still under the responsability of the KDE community (Johnny Jazeix being the most active contributor).

The new activities are:

Timothée Giet updated images for chess, hangman and horizontal/vertical reading activities along with the gcompris logo.

Lots of little fixes/improvements have been done (storing and restoring the window's width/height at start-up, docbook updated, levels/images bonus, adding an internal dataset for words games so that we no more expect the network to run GCompris (except for the voices but they also can be bundled in the binary).

For Android it is available on the Google play store.