Using the graphic tablet as a writing tool together with a specially designed software brings a new dimension to education process of a writing for children. It can make easier education process for teachers and more interesting for pupils. The paper deals with the education game "Writing Tutor", that enables children to learn and improve their writing of letters, words, symbols in various activities. During particular activities of the game, data written on the tablet have been processed, using the special algorithms for pattern recognition. The tablet data have been evaluated and finally the result of a success has been announced. It is possible to exercise a shape of a letter according to a pattern, guessing a missing letter, practicing of minims, etc. The environment of the game is designed for children who are starting to learn writing.

Keywords: handwriting recognition, tablet, education of a writing for children.

Children education process on elementary schools can be enriched variously. The application Penguin Quart [5] has shown that an microphone connected to a computer can bring mathematics closer to an entertainment level. It teaches children to read numbers by playful form. Another project â€“ Multimedia Reading Book [6] helps teachers to teach K-4 children to read.

In this paper I will concentrate on development writing skills of young children at the first grade. At first, they usually use pencils and write various shapes on a paper according to patterns. Later, after a longer exercising, they try to write letters on a blank paper. Teachers check and assess pupils' work. They often pounce them where they have done mistakes and show them a correct technique.

Nowadays, it is common, that children at the age of 6 â€“ 7 years know a computer and can use it for simple operations. Using a graphic tablet as a writing tool together with a special software brings a new dimension in this sphere, not just for pupils, but for teachers, too. It can make a work for teachers easier and make the education process for children more interesting. A graphic pen can be used as an equivalent of a pencil and writing on a tablet imitates writing on a paper. Taking this idea as a base, a wide spectrum of possibilities of a concrete utilization can be offered. Pupils can be inspired positively to writing letters by designing and creating suitable exercises. A computer will control and correct written shapes automatically.

The application â€œWriting Tutorâ€ enables children to learn and improve their writing of letters, words, symbols. Written data from the tablet using special algorithms for identification of shapes have been executed during particular activities of the game. Finally, a result has been announced. It is possible to exercise a shape of a letter according to a pattern, guessing a missing letter, practicing of minims, etc. The environment of the game is designed for children, that are starting to learn writing. The game can be widened easily. Teachers can fill up his own shapes, patterns, activities, etc.

Non-linear (elastic) consideration creates a more intuitive rate of similarity. It enables to consider shapes, that are in sequence, eventually moved in a time (it considers i-th point with i-th + j-th point). â€œElasticâ€ consideration is the basis of the algorithm DTW. The time and pressure component of coordinates is not considered in my suggested algorithm but if Hidden Markov Models (HMM) are used they will be necessary [8]. 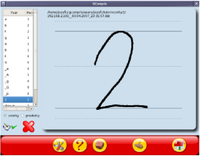 Children can watch how to write the letter. After the demonstration children are trying to write same shape like the model. They are using the graphic tablet of course. The writing model is showed all the time and is colored by a different dim color. Children can consider their written shape and click on the button â€œCheck answerâ€ which is illustrated by a hand with standing thumb. Pupils are informed about the success of writing by animation or sound. It the case of the good result, they are moved forward to next level. 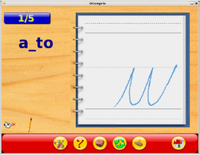 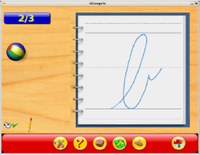 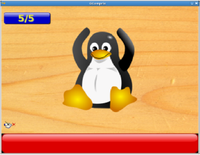 Writing tutor uses the standard graphic tablet which is configured at the operating system level. An appropriate driver provide same functionality like mouse with earlier mentioned improvements. If the tablet is not presented mouse can be used instead it.

The comparative algorithm is based on DTW with acceptable results. Because children must follow writing model, which is permanently showed, the DTW comparison is good. Problems would be with randomly or not proportionally written shapes. It can be solved by HMM approach to written shapes recognition. Collected patterns and results of specific activities are saved and can be sent via net to a teacher for a checking. 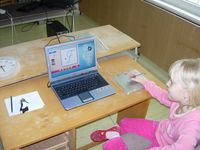 The set of experiments was realized on the Elementary school in ÄŒernysevsky street, Bratislava. Their objectives were: the improvement of the application by finding objectionable parts, a collection of patterns and finally finding out effects and the asset of using the writing tutor in a practice.

For a consideration of realized experiments it can be stated, that the game represents a new interactive tool for pupils and teachers. It enables pupils to improve their skills in the writing of various shapes in the interesting way. It makes the education process for teachers easier because of automatic control and checking of pupils.