Difference between revisions of "GCompris internals"

GCompris is made of 2 major distinct parts. The core and the activities.

In many games the concept of a core has been introduced. The goal of the core is to separate the gaming data from the general and common utilities. For example, in GCompris we provide an advanced way to manage data resources, users, classroom, profiles. It is not up to each activity developer to take care of that. An API is provided to let them focus on what matters to them, making a fun and highly educational activity. 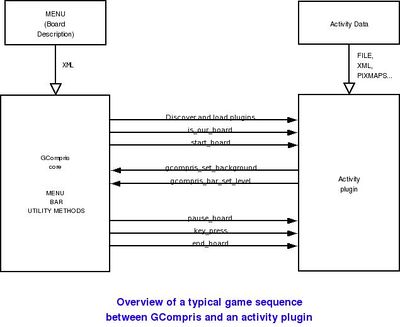 When GCompris is started, it first starts the menu named menu, unless a specific activity is provided using gcompris -l. In GCompris, the menu is an activity like any other one. Only its role is different. It is in charge of starting other activities.

GCompris doesn't know statically which menu entry goes with which activity code. When parsing the menus, it checks if it can find an activity code able to handle it. If not, the activity icon won't appear in the list.

When the child clicks on the activity, its start entry point is called. Then the activity code is in charge of the activity area. It needs to initialize it with its graphical elements and initiate the activity game. It must initialize the control bar to display only the relevant buttons.

When the activity is done, or the user clicks on the activity exit button, the end entry point is called. The activity must cleanup the display area and all its internal structure.

Each activity may be run and distributed independently. For example SugarLabs distributes each GCompris activities individually.

Each activity must have its own directory under src. It contains all it needs to be installed and run. For example, a python activity will have these files:

There are 2 ways to run GCompris: installed or in the source with runit.sh. In both cases we expect GCompris to find its images. What is important to see, when you run GCompris a line is display that looks like this:

This will be the base directory where GCompris will search for its resources, images, sounds, data file. This means that if you reference an image as gcompris.utils.load_pixmap("myimage.png") it expects to find the image in 'package_data_dir'.

But since we have a single 'package_data_dir' for the whole GCompris, we don't want each activity to overwrite others images. For if activity 'A' wants an image myimage.png and activity 'B' a different red.png, these would end up in the same directory. To avoid this, each activity loads its images this way:

This is why you have to create a directory resources/A in activity A.

The legacy way for creating new activities is to code them in C using GTK/GLib and the GooCanvas.

To make a clean separation between the core and the activity, each activity is an independent plugin. The plugin must implements a set of functions in order to be operated by the core: